From 14 November to 19 November, Jun.-Prof. Judith Golda and Dr. Sebastian Burhenn visited the laboratory of Prof. Claire Douat at the GREMI in Orléans for a joint research campaign. This time, the work was focused on the measurement of plasma-produced carbon monoxide affecting human hemoglobin. The trip was funded by a DAAD PROCOPE project to improve cooperation between RUB and GREMI.

From 18 July to 29 July, Jun.-Prof. Judith Golda, Dr. Laura Chauvet, and Daniel Henze were guests in the laboratory of Prof. Claire Douat at the GREMI in Orléans. In a joint measurement campaign, two different atmospheric pressure plasma jets were tested. They measured the production of CO at different operating conditions with a gas analyzer. This trip was funded by the DAAD as part of a PROCOPE project to improve cooperation between RUB and GREMI. 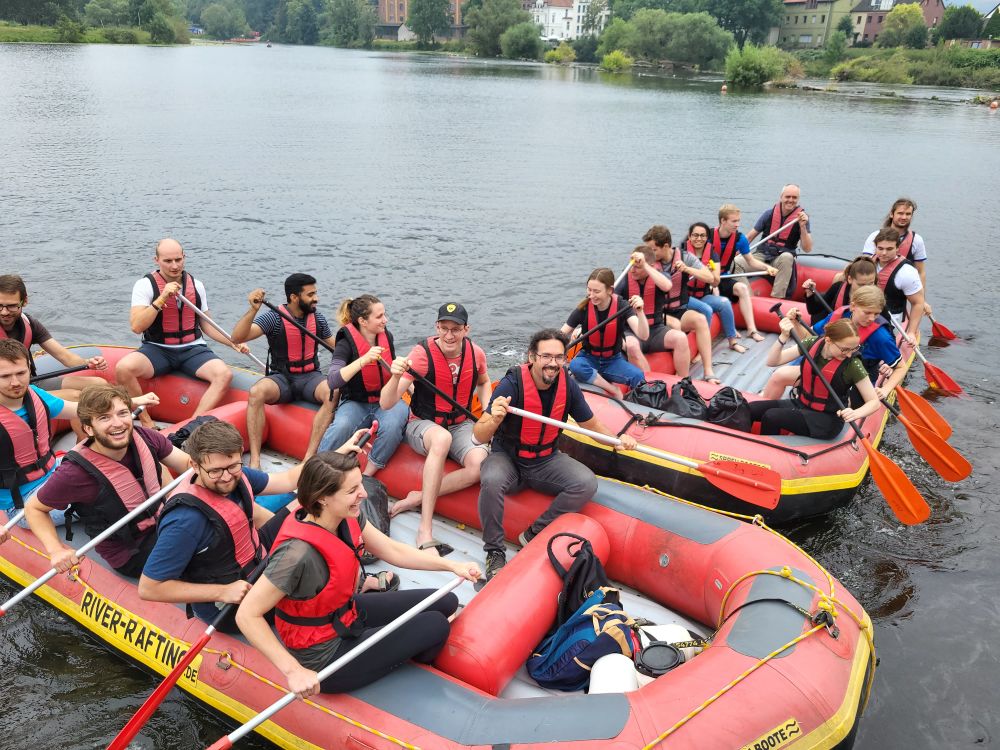 Within the frame of the PROCOPE project, Claire Douat and Eloise Mestre from GREMI in Orléans, France, visited the Bochum lab of Jun.-Prof. Judith Golda. The research stay took place between May 8 and May 22, 2022,  to study CO production in a kHz jet source using mass spectrometry.

PROCOPE is a DAAD funded project to enhance the cooperation between RUB and GREMI.

In collaboration with Dr. Claire Douat from the institute GREMI in Orléans, France, a joint DAAD project on the diagnostics and application of plasma radiation as a CO source for sterilization in wound healing was submitted this year. This has now been approved by the DAAD for 1.1.2022.

The aim of the project is to investigate the production pathways and the role of the CO molecule in the plasma treatment of biological material. To study CO generation in CAPs, two well-characterized plasma sources will be used that have complementary operating principles: A radial kHz-dielectric barrier discharge with direct contact of the plasma including ions, electrons, and strong electric fields with the treated substrate; and a coplanar RF discharge where only the field-free plasma effluent containing reactive species and plasma-generated photons reaches the substrate. This project will explore possible synergistic effects between CO and plasma-generated species such as electric fields, ions and electrons, photons, and other neutral radicals. The two complementary plasma sources will be used to distinguish the effects of indirect and direct plasma treatment on the impact of plasma-produced CO on bacteria. The plasma sources used here will be characterized with CO2 admixture to ensure that the amount of CO produced is below the toxicity limit. Parameter variations will be used to determine the optimal CO production conditions.

Plasmas for the Systems for material conversion are an important component in the utilization and storage of decentrally generated renewable energies. The Collaborative Research Center 1316 (CRC 1316) "Transient Atmospheric Pressure Plasmas - from Plasma to Liquids to Solids" is dedicated to combining atmospheric pressure plasmas with catalysis to develop the most flexible solutions possible for this material conversion. "They should be scalable, controllable and robust against external influences, such as impurities in the starting materials," explains Prof. Dr. Achim von Keudell, spokesman of the CRC.

The first funding period of the CRC 1316 was dedicated to the elucidation of transient phenomena in atmospheric pressure plasmas as well as interfacial processes at the surface of catalysts. Here, the focus was on three systems: the plasma-catalytic conversion of gases, the combination of plasmas with electrolysis at the interface between liquid and solid, and plasma-assisted biocatalysis, in which enzymes very selectively produce new molecules. The researchers were able to make great progress in these areas: For example, they achieved precise control of the formation of reactive particles in these plasmas. They were also able to gain a deeper understanding of the atomic and molecular surface processes in these systems.

In the second funding period, these findings will be brought together to make the best possible use of the interplay between a plasma with its reactive particles and a catalytically active surface. There are many further questions in this regard, since in traditional catalysis, for example, stable molecules are essentially reaction partners, whereas in plasma catalysis, reactive particles or highly excited species can accelerate or suppress a specific reaction path. On this basis, the first prototype plants for plasma catalysis, plasma electrolysis and plasma biocatalysis are to be developed.

In addition to the RUB as the host university, researchers from the University of Ulm, the Jülich Research Center and the Fritz Haber Institute in Berlin are involved in the CRC.

The research group "Plasma Interface Physics" will be involved in the three projects A6, B2 and B11.